“Air Bud” is a classic Disney movie that tells the story of a shy boy who meets a new friend: a runaway golden retriever. It isn’t an ordinary golden retriever, however. He has the incredible ability to shoot a basketball using his nose! The boy’s new friend, Buddy, ends up joining his middle school basketball team and becomes an all-star player.

“Space Jam” is one of the most popular kid sports movies of all time. It stars Michael Jordan and your favorite Looney Tunes. The movie tells the fictionalized story of Michael Jordan’s initial retirement from the NBA and his comeback, during which the Looney Tunes helped his team win their freedom in a basketball game against the Monstars.

“Remember the Titans” is inspired by a true story about the integration of the T.C. Williams High School football team. Denzel Washington plays Herman Boone, the African-American head coach who has to convince his team to set aside their differences and unite for a common cause.

Where to Watch: You can watch “Remember the Titans” on Disney Plus. 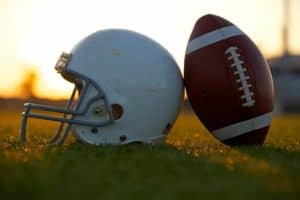 “The Blind Side” tells the story of Michael Oher, a homeless black teenager who has drifted in and out of the school system for years. With the help of the Tuohy family, who eventually become his legal guardians, Michael realizes his potential as a student and as a football player.

“Coach Carter” is a teen sports movie that tells the story of Ken Carter, who returns to his old high school to be the basketball coach. With tough rules and discipline, he sets the team on a winning streak. However, he suspends his undefeated team due to poor academic results.

Where to Watch: You can rent Coach Carter on Amazon Prime for $3.99.

“The Sandlot” is one of the most famous kid sports movies! It’s a coming-of-age comedy that tells the story of a group of young baseball players and all of their adventures together. “Like Mike” tells the story of 14-year-old, Calvin Cambridge, who dreams of becoming a famous basketball player. One day, he laces up a pair of old sneakers with the initials “MJ” on them. Suddenly, he makes the leap from playground basketball to NBA stardom.

“All American” is a sports drama TV show about high school football player, Spencer James, who is recruited to play for Beverly Hills High. He is forced to move in with the coach and his family to protect his transfer, and the coach’s son and star quarterback is less than thrilled.

Where to Watch: You can watch All American on Netflix.

“Bend It Like Beckham” is about the daughter of a strict Indian couple who is not permitted to play organized soccer. When she is caught playing for fun, she’s convinced to play for a semi-pro team. She then has to deal with hiding her matches from her parents and her romantic feelings for her coach.

Where to Watch: You can rent “Bend It Like Beckham” on Amazon Prime for $3.99. Friday Night Lights is a TV Drama series that follows the lives of the Dillon Panthers, one of the nation’s best high school football teams, and their coach, Eric Taylor. In this town, winning the football championship is more important than anything else.

Where to Watch: “Friday Night Lights” is available to stream on Hulu.

These kid sports movies and shows will keep you busy until you can visit us and play again! You can stay up to date with what’s happening at our Gatlinburg sports complex and when you can come play here.