4 of the Best Motivational Quotes for Young Athletes

When you’re in search of inspiration before a big game or during halftime, nothing is better than reading a motivational quote from one of your favorite athletes or coaches. Hearing the words of someone who has been in your shoes and persevered can be the perfect way to boost your confidence and energize your spirit. To help you prepare for your next tournament, Rocky Top Sports World has put together four of the best motivational quotes for young athletes.

1. “The most valuable player is the one that makes the most players valuable.” – Peyton Manning

Peyton Manning knows a thing or two about being the most valuable player – he was named the NFL’s MVP a record five times! Nevertheless, Manning has always been the epitome of a team player. As a quarterback and a leader, Peyton Manning did everything in his power to help his teammates play at their full potential. Manning’s career shows how much you can accomplish when you put the needs of your team first.

2. “I’ve missed more than 9,000 shots in my career. I’ve lost almost 300 games. 26 times, I’ve been trusted to take the game-winning shot and missed. I’ve failed over and over and over again in my life. And that is why I succeed.” – Michael Jordan

Michael Jordan is the greatest basketball player of all time, but he wasn’t just born an All-Star. As the above quote shows, Jordan repeatedly experienced failure throughout his career. Making mistakes and losing is part of the game, but learning from your failings is the key to improving. It is comforting to remember that even a legend like Jordan missed 50.3 % of all the shots he took during his time in the NBA.

As a young football player at Fordham University, Vince Lombardi got knocked down repeatedly (and even lost several teeth on the field). Lombardi was also metaphorically “knocked down” when his semi-professional football career with the Wilmington Clippers ended in failure. Every time Lombardi experienced a setback, however, he “got back up” and kept fighting. This perseverance paid off, as Lombardi went on to become the greatest coach in football history, with a remarkable 72.8% winning percentage.

4. “Somewhere behind the athlete you’ve become and the hours of practice and the coaches who have pushed you is a little girl who fell in love with the game and never looked back… play for her.” – Mia Hamm

What makes this quote from Mia Hamm so powerful is that it gets to the root of why we play sports in the first place. Great athletes like Hamm work incredibly hard to become the best of the best, but the driving force behind all of the time and energy spent practicing is simply love of the game. Hamm implores us to never forget the fun and childlike wonder that comes with playing your favorite sport. Even with her Olympic gold medals and FIFA World Cup victories, Mia Hamm was never motivated by accolades and acclaim, only by her passion for soccer. 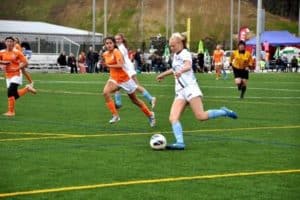 We hope that these motivational quotes for young athletes serve you well during your next game at Rocky Top Sports World. Located in Gatlinburg, TN, our 80-acre athletic campus is the ultimate tournament destination. With seven fields, six basketball courts, 12 volleyball courts, team rooms, and an onsite grill, our complex has everything you need for a spectacular sports event. To see a complete listing of our upcoming tournaments and camps, check out the Rocky Top Sports World Events Calendar!