4 True Stories About Youth Sports That Will Inspire You

Sometimes it’s not until you’re given a challenge that you realize how strong you are. When you play youth sports, you learn the importance of working hard to achieve goals, like winning a game. There have been many youth athletes who have overcome obstacles to have a shining moment, and it’s these moments that become an inspiration to other youth athletes. Here are 4 true youth sports stories that will inspire you.

It was Lainy Fredrickson’s senior year when she faced her first minutes on the court for the Norman High School Lady Tigers. Lainy is special needs and is a Special Olympics veteran, so she knew what she had to do when she stepped foot on the court: get in scoring position. It was the final minutes of a game against the school’s arch-rival, but Lainy didn’t let the pressure get to her. Although she missed her first few attempts, the encouragement from both the crowd and her teammates kept her going. She banked in the last shot of the game and was greeted with thunderous applause! Lainy’s story inspires everyone to chase their dreams and shows that with the encouragement from teammates, anything is possible. Spencer Wilson was a 17-year-old student and basketball player at Bishop Mcguinness Catholic High School when he played in one of the most important games of his life: the Dedication Game. For the Dedication Game, each player dedicated the game to a special person in his life. Spencer chose to dedicate the game to Josh Rominger, who lost his battle with cancer the previous year. Spencer and Josh became close through their experiences fighting cancer. Just 3 years prior, Spencer had been given just 6 months to live and now is a 2-time cancer survivor. Spencer knew he had to put his heart and soul into the Dedication Game to honor his friend. Bishop McGuinness was trailing by a point with just seconds left on the clock. Spencer got the ball and launched it from half-court. The shot banked in, giving Bishop McGuinness the win. Spencer’s youth sports story inspires everyone to play for someone, whether it’s a friend, family member, or role model, and channel that energy while you’re on the court or field.

Ten-year-old Lilly Biagini is no stranger to loss. Lilly was born with Arthrogryposis Multiplex Congenita, a condition that meant there were no joints in Lilly’s lower body. She used a wheelchair until the age of 6, then ultimately convinced doctors to perform a surgery that enabled her to have prosthetic legs. In October 2017, Lilly lost her home and everything she and her family owned, including her prosthetic legs, in the California fires. But Lilly didn’t let that stop her. She was fitted for a new pair of prosthetic legs that gave her even more mobility. Lilly attended a Harlem Globetrotters game and had the opportunity to meet Zeus McClurkin, who later visited her at her school and had her show him her gymnasium. Lilly didn’t have the upper body strength to make a shot on a 10-foot hoop, but Zeus taught her an old Globetrotter technique — bouncing the ball to reach the basket! Lilly tried out the technique and made her first basket ever! Lilly’s story inspires kids not to give up when things get hard and one day you’ll hit your lucky shot. 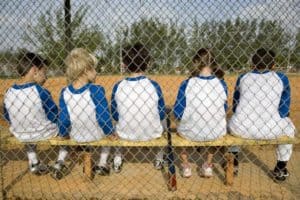 Little League Coach Dave Belisle had some inspiring words for his Rhode Island team after they lost in a Little League World Series elimination game. The team lost 8-7, and the close loss left many of the players in tears. Coach Belisle wanted the kids to know that the loss shouldn’t take away from their other victories and how well they played together as a team. “There’s no disappointment in your effort — in the whole tournament, the whole season. It’s been an incredible journey … The lessons you guys have learned along the journey, you’re never going to forget.” He went on to say, “It’s OK to cry, because we’re not going to play baseball together anymore. But we’re going to be friends forever.” This story is the perfect example of how all youth sports coaches should act — encouraging their team and teaching them important life lessons along the way.

Create some inspiring youth sports stories of your own at Rocky Top Sports World! We are located just minutes away from downtown Gatlinburg and are one of the top tournament destinations in the United States! Our 80-acre athletic campus has everything you need for an amazing sports event. Check out all of our upcoming camps, and get your kids involved in youth sports!