Although it is often overlooked, culture is one of the most important aspects of a youth sports team. A positive culture makes playing on a team fun and rewarding, while a toxic culture can stress athletes out and sabotage their performance. Bo Hanson, a former Olympic athlete and coaching consultant, defines team culture as “the way we behave on this team.” The behavior of athletes on a team is a reflection of the team’s values, so a good team culture starts with a set of shared principles. To help you create a successful culture for your youth sports team, Rocky Top Sports World has put together the following four tips.

1. Be Proactive About Creating the Right Team Culture

While team culture can develop organically, this is not recommended, because there is no guaranteeing what that culture will look like. When there is no guiding hand, it is possible for a few bad apples to monopolize the culture and lead the team down a path of negativity and immaturity.

Instead of letting the chips fall where they may, a coach should take proactive steps to establish a positive team culture. This means gathering the whole team at the beginning of the season for a group discussion about the team’s identity and values.

2. Make Sure Athletes Have Ownership of the Team Although the process of defining a team culture should be led by the coach, it is important that athletes have plenty of input. In an ideal culture-building session, a coach will pose questions to the team and facilitate discussion. Sports psychologist Dr. Jim Taylor suggests that coaches ask the following questions to their team:

As athletes respond to these questions, the coach can write their answers on a whiteboard. By the end of this session, your team’s culture should be solidified and officially put in writing.

3. Incorporate These Ideas into Your Team Culture

When a coach guides the formation of the team culture, there are a few concepts that he or she will definitely want to introduce during the discussion session. Some of the ideas Dr. Taylor recommends incorporating into your culture include: 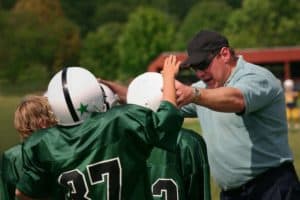 Although the formation of your team’s culture will take place during your first practice session, it is important that its principles are consistently reinforced throughout the season. A great way to keep your team culture at the top of your players’ minds is to create physical reminders of the values you agreed on. For instance, a coach can create posters with the team’s principles printed on it or give out wristbands that are inscribed with key phrases.

When a player exhibits one of the team’s core values, such as good sportsmanship, it is important that they are recognized and praised. Likewise, if a player is not abiding by the team’s culture, they should be dealt with immediately. With enough reinforcement, players will start to encourage each other to follow the team culture. If everyone on the team wears team culture wristbands, simply pointing to the band can be a quick and effective way of reminding one another to live up to the team’s values. Located minutes away from downtown Gatlinburg, TN, Rocky Top Sports World is one of the best tournament destinations in the U.S. With seven fields, six basketball courts, 12 volleyball courts, team rooms, and an onsite grill, our 80-acre athletic campus has everything you need for an amazing sports event. To see a complete list of our upcoming tournaments, browse the Rocky Top Sports World Events Calendar!