When you think of iconic American sports, baseball, football, and basketball probably come to mind. However, recent youth sports participation data shows that soccer is quickly becoming a force to be reckoned with. In 2016, there were roughly 3 million kids playing in youth soccer leagues. That’s over a million more kids than baseball and double the amount of kids who play tackle football!

This boom in youth participation has translated to a more prominent place for soccer in American popular culture. Watching professional soccer on TV or attending a game has become totally mainstream, in a way that it wasn’t a decade ago. Rocky Top Sports World has put together a quick look at how soccer has become one of the biggest sports in the United States.

As noted in an article from the Huffington Post, 1996 was supposed to be soccer’s big moment in America. Major League Soccer launched its first season with ten teams, and the U.S. had just hosted the World Cup two years ago. However, MLS floundered in its first few seasons, failing to fill seats and losing millions of dollars.

20 years later, it is clear that sports take time to catch on. As more and more kids have gotten involved in youth soccer, “the beautiful game” has grown astronomically. In 1974, only 103,432 kids belonged to a youth soccer league. Today, America has the most youth soccer players in the world.

This explosion of young fans has bolstered MLS, which has now expanded to 20 teams across the nation. Instead of playing in half empty football stadiums, soccer teams now play in their own stadiums. Unlike the 1990s, MLS is now very profitable, with the average value of a team around $157 million.

(See Also: Should Young Athletes Specialize in Only One Sport?)

Popular with Boys and Girls What separates soccer from other sports is its popularity with both young men and young women, with girls making up 48% of youth participants. Unlike football, which has many female fans but virtually no avenues for girls to participate, soccer is accessible to both sexes at both the amateur and professional levels. In fact, women’s soccer sometimes eclipses men’s soccer (and other male dominated sports).

For instance, the 2015 Women’s World Cup was watched by more people than the World Series, the NBA Finals, and the Stanley Cup Final. With 20.3 million people tuning in to watch the World Cup, you can bet that TV networks and advertisers are taking notice.

The skyrocketing participation in youth soccer has been aided by the development of world class facilities. In the Huffington Post article, the author writes about the importance of having the right place to play:

“Great facilities do two things. They create increased excitement for the sport and they create better players. As soccer interest and leagues grow, we’re going to need to create better soccer players”. 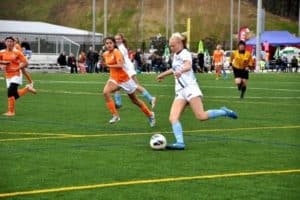 Here at Rocky Top Sports World, we couldn’t agree more. Our 80 acre sports campus is one of the top destinations for soccer tournaments and camps in the Southeast. We offer seven beautifully maintained fields in the foothills of the Great Smoky Mountains. Located just 4 miles from downtown Gatlinburg, TN, our complex has everything young athletes need to compete and grow. To learn more about us, check out the Rocky Top Sports World Facilities page!