To get pumped up before a big game, the best thing to do is listen to a warm-up song! Nothing gives you that rush of adrenaline you need more than one of your favorite songs. To help you decide what to put on your pre-game playlist, we’ve made a list of some of the best songs to warm up to.

“Eye of the Tiger” is a classic warm-up song! The song was released in 1982 and still is popular today. It was featured in the movie “Rocky III,” and continues to be a great workout and warm-up song. Lyrics include, “It’s the eye of the tiger, it’s the thrill of the fight. Risin’ up to the challenge of our rival.” When you hear “Let It Rock” echoing through the gymnasium, you’ll feel unstoppable. This song by Kevin Rudolf and Lil Wayne came out in 2008 and will get you pumped up before any game. Lyrics include, “Because when I arrive I, I’ll bring the fire. Make you come alive.” “Firework” by Katy Perry was released in 2010 and has been getting people pumped ever since! The lyrics are motivational, and the beat makes you want to get up and move around. Lyrics include, “You just gotta ignite the light. And let it shine. Just own the night. Like the Fourth of July. ‘Cause baby you’re a firework. Come on show ’em what your worth.”

“Can’t Hold Us” by Macklemore and Ryan Lewis will you get you up and jumping around! This song was released in 2012. Lyrics include, “This is the moment. Tonight is the night, we’ll fight ‘til it’s over. So we put our hands up.” You’ll be ready for anything when you listen to this song! Right before you take the court or field, listen to “I Gotta Feeling” by The Black Eyed Peas. You’ll feel like you’re ready to take on any challenge. Lyrics include, “Here we come, here we go, we gotta rock. Easy come, easy go, now we on top.”

“Jump” is another classic! This Van Halen song has been around for years, but it’s still one of the best songs to warm up to before any youth sports game. Not only will it make you want to “jump,” but it’ll get you pumped! Lyrics include, “I get up, and nothin’ gets me down. You got it tough, I’ve seen the toughest around … Might as well jump.”

If you’ve ever been to a sporting event, chances are you’ve heard “Don’t Stop Believin’” by Journey playing in the background at some point. If you want to get pumped up, put this song on your warm-up playlist! Lyrics include, “Don’t stop believing. Hold on to that feeling.”

Bonus Track – “We Are the Champions” 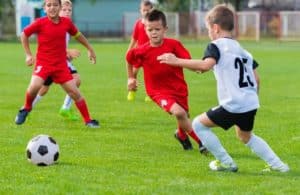 After the game, you can’t go wrong giving “We Are the Champions” by Queen a listen. If you win, it’s the perfect celebratory song!