Now in their 90th year, the Harlem Globetrotters are an indelible part of American sports and culture. Known for their incredible athleticism and outrageous antics, the Globetrotters have delighted fans from all around the world in over 26,000 exhibition games. In June, this one-of-a-kind team will return to Rocky Top Sports World for a special Smoky Mountain basketball camp! Read on for everything you need to know about this can’t-miss event.

The Harlem Globetrotters Basketball Camp will be held at Rocky Top Sports World on June 18 from 9 a.m. – 12 p.m. The camp is open to boys and girls between the ages of 6 and 12.

Young athletes will walk away from this camp with a knowledge of the fundamentals of basketball. Proper technique for dribbling, passing, and shooting will be taught alongside ball handling tricks, character development, and teamwork. We can’t think of anyone better than the Harlem Globetrotters to impart these skills!

Of course, it wouldn’t be a Globetrotter camp without plenty of fun! The all-star players will keep the kids in stitches with their signature tricks throughout the day. Campers will also have the chance to get autographs and photos with the Globetrotters, so they can remember this unique experience for years to come. The Harlem Globetrotters were founded in 1926 in the south side of Chicago. The Globetrotters adopted Harlem as their supposed home city because it was considered the center of African-American culture during the jazz age. Ironically, the Globetrotters didn’t play a game in Harlem until 1968!

While the Harlem Globetrotters started out as a traditional basketball team, they set themselves apart from the NBA in the 1950s by incorporating comic routines into their act. Classic bits made famous by the Globetrotters include spinning balls on their fingertips, juggling balls between players, and making impressive trick shots. Many member of the Harlem Globetrotters went on to become NBA stars, including Wilt Chamberlain, Meadowlark Lemon, Connie “The Hawk” Hawkins, and Nat “Sweetwater” Clifton.

Over the years, the Globetrotters have traveled to 122 countries and territories. In 1959, the Globetrotters made a notable trip to Moscow in the midst of the Cold War, demonstrating their ability to bridge cultural and political divides through athletics and comedy.

The Globetrotters are no strangers to pop culture fame, having starred in their own 1951 film, a live-action TV show, and two Saturday morning cartoon series. The team has also made special appearances on a variety of television shows, including The Tonight Show, Gilligan’s Island, The Love Boat, and even Scooby Doo. 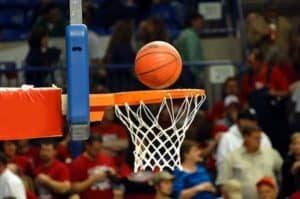